🕸 Wizardia, a Play-to-Earn online role-playing game powered by Solana. Enter a magic filled metaverse that will keep sending you on otherworldly adventures.

We are giving away a $50 allocation to 100 lucky winners for the upcoming Wizardia IDO on TrustPad! 🔥​​Each winner will have a guaranteed opportunity to invest $50 in the pre-public round of Wizardia on TrustPad.

Unsold token will go to the FCFS Pool

We are giving away a $25 allocation to 100 lucky winners for the upcoming Wizardia IDO on NFTPad! 🔥​​Each winner will have a guaranteed opportunity to invest $25 in the pre-public round of Wizardia on NFTPad.

🔥 Finish all quests below to earn the most valuable prizes from Spores x Wizardia IDO. The higher entries you get, the higher chance to win.
🎁 PRIZE POOL: $1750 in total

BUY to get discount, chance to x10 your account!: https://wizardia.io/ref=o5rh368vnq

To benefit the Wizardia economy, Arena Genesis NFTs will be released over 7 rounds. There is a maximum of 28,000 NFTs made available.

How can I earn with Arena Genesis NFTs? 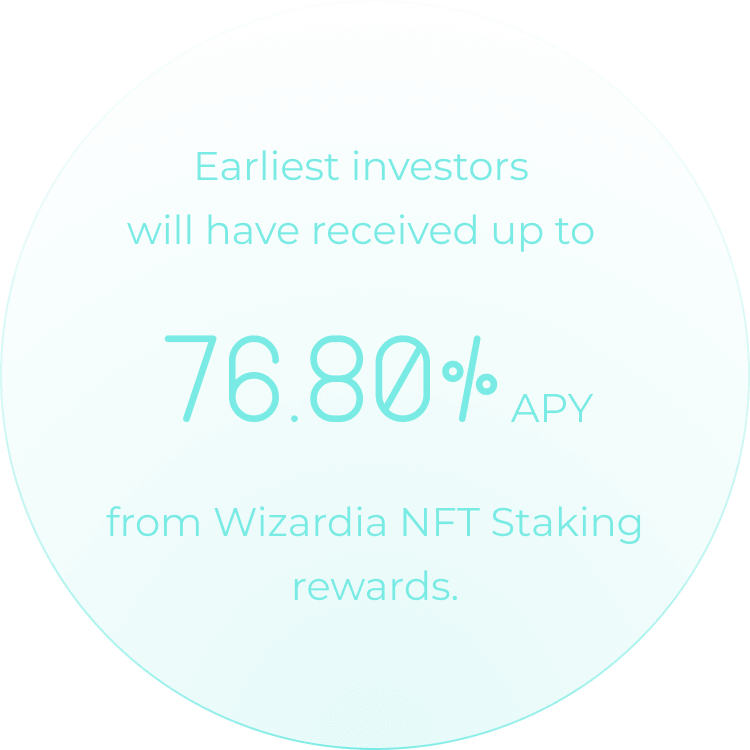 Welcome to the World of Wizardia

Each player gets to take part in or even specialize in different game modes such as PvP and PvE battles, base-building, exploration, item crafting, and magical research. Wizardia rewards those who contribute to the game’s metaverse and its real-valued economy system.

$WZRD is a utility token that also acts as an in-game currency powered by the high-performance Solana blockchain. $WZRD tokens can be spent as well as earned or exchanged by every player inside and outside of the game.

The game is built on unique Non-Fungible Tokens (NFTs) that have in-game purposes. Players can take advantage of NFT perks or sell them to other players or investors.

The $WZRD token will be at the center of Wizardia’s gameworld. Fees will be collected through game mechanics including transactions, tournament participation, magic discovery, crafting, and construction. Tokens will be distributed back into the game economy through staking, quest completion, PvP / PvE rewards and event participation.

NFTs in the Wizardia World

Two varieties of Wizardia NFTs have been announced so far:

The Grand Plan for Wizardia

Gameplay modes will be released in a staggered fashion during 2022 with battle commencing in the first alpha version of the Arena in Q2/Q3. Players will lead teams of 3 wizards in PvP and PvE combat. Subsequent releases will introduce the full game functionality including global tournament play, base building, exploration and a VR/AR integration by the end of Q4.

The Wizardia team has core contributors with strong blockchain experience and a lineup of crypto-gaming experts as advisors. What sets the project apart is its core knowledge of game development. Team members have been involved on a long list of triple A games such as Call of Duty Black Ops series, League of Legends, and Titanfall.

Wizardia’s founders have been dreaming up the world of Wizardia, its setting and lore, in one way or another, for more than a decade.

The team strongly believes that to realize the full potential of the crypto economy of the project, building a captivating game must be their top priority. They’re excited to welcome crypto-enthusiasts and gamers alike into the rich and rewarding realm of Wizardia.

To learn more about Wizardia, click the links below: